The Tanthirimale monastery is now surrounded by huge boulders and thick forest covers. One could only imagine what the monastery had looked like nearly 2300 years ago but the peace and serenity still prevails.

Built in the Third Century BC and used by King Devanampiyatissa as a one-day stop to Arahanth Theri Sangamitta on her way to Anuradhapura, Tanthirimale seems to have developed from a small temple to a large monastery by the end of the Anuradhapura period.

Tanthirimale was not Tanthirimale at the beginning. The area was first civilised by a minister of King Vijaya called Upatissa, who chose this ground surrounded by Malwatu Oya and Kanadara Oya by three sides to build his future town then named Upastissa Gama.

When King Devanampiyatissa first visited the temple in Tanthirimale, it was known by another name - Thivanka Bamunu-Gama. It was confirmed by a rock inscription near the ancient Bodhi tree at sight, which states that one of the first eight offshoots of Jaya Sri Maha Bodhi was planted at Thivanka Bamunu-Gama.

Although the name suggests, the village was the home to a Brahmin called Thivanka, archaeologists have a different theory on it. They suggest that it was called Thivanka since it was a Brahmin village surrounded by three curves of the Malwatu Oya.

Some go as far as to suggest that Tanthirimale is the long lost ‘Panduvasdewu Nuwara’ the legendary kingdom of King Panduwasdewa, father to Unmada Chithra and grandfather to the first King of Sinhala- Pandukabaya.

It seems to have been a developed city in the turn of the Third Century BC since King Devanampiyatissa also chose to plant one Bodhi at Tanthirimale out of the first eight shoots to spring off from Jaya Sri Maha Bodhi in Anuradhapura. Thus the Bodhi tree can count nearly 2300 years of existence and is still standing proud.

The most beautiful sight at Tanthirimale is the Samadhi and reclining Buddha statues carved from the large rocks of Tanthirimale.

The Samadhi statue established near the Bodhi shows characteristics of the late Anuradhapura period. Standing eight feet high, the statue has an unfinished look about it and the two rows of unfinished and uncarved outlines of Buddha statues by the sides of the main statue confirm the fact that the statue was built in the last age of Anuradhapura prior to the invasion of Kalinga-Maga.

The same sense of urgency is visible in the reclining Buddha statue. More trends of the Polonnaruwa period are present in this 45 feet statue. The Kalinga-Maga invasion seemed to have kept the artist in check since he had left the statue without giving it the elegant shape it deserves.

The invasion created a great migration from Anuradhapura to Polonnaruwa and left many a great monastery and palace abandoned to the forest.

The great statues of Buddha too were left to destiny with only statues of gods and lions standing to protect them. The roof and its stone pillars had given away centuries back exposing the statues to sun and rain but the worst damage had been done by treasure hunters.

When Tanthirimale was re-discovered by Ven. Kudakongaskada Vimalagnana Thera in the early 1960s, the reclining statue and the Samadhi statue were badly destroyed by the treasure hunters who had burrowed and mined into the statues in search of material treasures.

Although the Samadhi statue had been re-created to its initial appearance the attempts to re-create the reclining statue since 1974 by the Archaeology Department has been a failure up to date.

Many stone containers originally created to contain gems had been scattered around the monastery premises and are piled up at the museum at site.

Only the monastery library and 12 meditation caves have escaped the attacks of the treasure hunters.

The Pothgula or the monastery library is situated on a high rock. The 12 Padhanagaraya structures are the only buildings within the monastery site. Scattered over 250 acres the Padanagarayas served as meditation or living areas for meditating monks. They were surrounded by water and were also used for pohoyakarma or punitive rituals.

Five meditating caves scattered inside the deep forest of Tanthirimale however, date back to the first century BC with Brahmi writings detailing donors and constructors of the caves.

The presence of these writings, some as old as 4000 years, suggests the presenc0e of a civilisation in Tanthirimale older than the Buddhist civilisation introduced by Arahanth Mahinda. 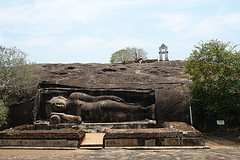 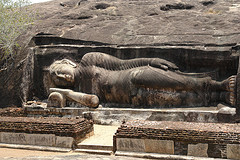 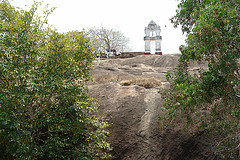 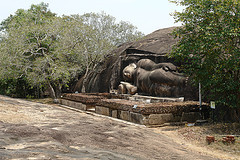 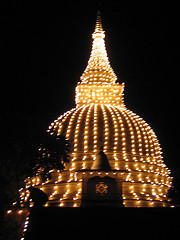 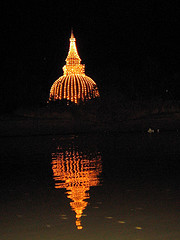 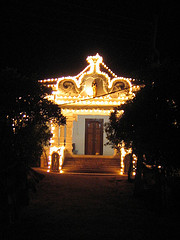 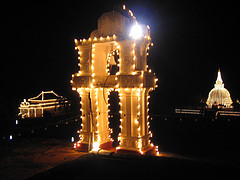 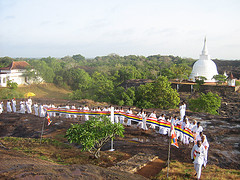 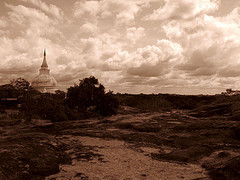 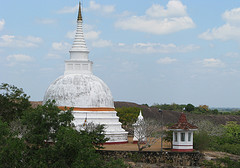 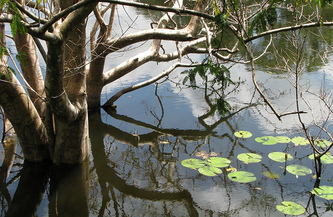