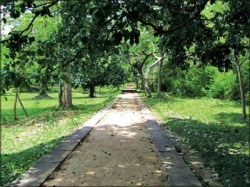 If you are looking for a haven of peace and quietude - why not spend the day at Arankele. Its green sylvan surroundings will relax and refresh you completely.

But this was never meant to be a pleasure park. On the contrary it was the site of an ancient forest monastery - the austere abode of a sect of recluse monks who had been attracted to this site because of its very isolation and seclusion. Today it is a celebrated archaeological site containing the ruins of the ancient forest monastery.


The monks who dwelt here were called Pansukulika. Pansukulika means 'rag-robes' and refers to a vow taken by these monks to wear only robes made from rags. They observed extreme austerity and they lived in caves and in monasteries in mountains and forests and their piety and austere way of life were greatly admired by the people.


The monastaries in which they dwelt are now known as padhanaghara pirivenas.


A principal feature found at the padhanaghara pirivenas of the pansukulika are the double platform buildings. These are raised platforms formed by retaining walls of massive stone, found in pairs and linked together by a stone bridge. Access to the building is from either side of the stone bridge by two short flights of steps in the centre and between the two platforms. The balustrades and guard stones are devoid of ornamentation and simple in style.


Another special characteristic of these buildings is that they were surrounded by water troughs believed to keep the interior of the building cool. There are several such buildings at Arankele. Evidence of such buildings are also found at Ritigala, and Mihintale.


It is not known with any certainty what the function of these double platforms was. Scholars believe that they were used for meditation, ceremonies and teaching.


The building at the entrance of the Arankele site has been identified as a Jantagara or hot water bath. Amongst the other ruins that have been identified are meditating promenades ponds and winding pathways.